The Hampshire Choral Society is a community chorus of adult men and women of all ages and experience levels. Our mission is to create beautiful music and have fun doing it. We work hard to produce a sound worthy of the great compositions we sing.

The Hampshire Choral Society was founded by members of the Northampton-Amherst Chorus, an ad hoc group of singers assembled to help the Springfield Symphony with a performance of the Berlioz Requiem.

In the years since 1953, we have had seven directors and thousands of members. We have performed throughout the Pioneer Valley and toured Romania and England.

An integral part of the community, Hampshire Choral Society sang at the Northampton Tercentenary celebration in 1954, for Hatfield’s Tercentenary in 1970, and for Northampton’s 350th Convocation. In 1959, for the town of Amherst’s Bicentennial, HCS joined with other singers to premiere Randall Thompson’s famous settings of Robert Frost’s poems, Frostiana. Thompson himself conducted the group and Frost was in the audience.

Randall Thompson conducts a combined chorus including HCS in the 1959 premiere of Frostiana.

We created the Young People’s Chorus, a choir for elementary to high-school aged children, in 1999 under the leadership of then-director Elizabeth Hart Damon. The award-winning chorus, directed by K.C. Conlan, and the Hampshire Choral Society often present a joint concert in the fall, singing together as one chorus to conclude the program.

For our 50th Anniversary season in 2003, we performed Elijah by Felix Mendelssohn to rave reviews.

We were privileged to present the North American premiere of A Cambridge Mass by Ralph Vaughan Williams in January 2012. Conductor Alan Tongue collaborated with Mr. Taylor by long-distance phone and e-mail conversations to prepare the chorus and orchestra. Nearly 1,000 people were in the audience as Mr. Tongue conducted the chorus and symphony. In May 2012, we performed an equally exciting and well-received concert in collaboration with the Pioneer Valley Symphony and Chorus. Allan Taylor conducted the orchestra and joint choruses in the beautiful, moving Missa in Tempore Belli by Haydn. PVS’s Paul Phillips conducted the choruses in the challenging and rousing Belshazzar’s Feast by William Walton, to enthusiastic acclaim.

We marked our 60th anniversary by giving our first solo performance at the Fine Arts Center of UMass in May 2013. The centerpiece of our program was Beethoven’s Mass in C, opus 86, widely regarded as one of his masterpieces. Our singers and guests celebrated at a post-concert reception where many historical programs, pictures and mementos were on display.

Our 2014-2015 season began with a performance of the dramatic Solemn Vespers by Wolfgang Amadeus Mozart and the appealing Chandos Anthem, Let God Arise by George Frideric Handel.  In May 2015, we had the unique experience of presenting a rare performance of the first masterpiece of choral music by an American composer, Mass in D by John Knowles Paine. It was the first performance of this important work in New England in many years.

In May 2016, we presented the spectacular Ein Deutsches Requiem by Johannes Brahms to an audience of over 600. As Mr. Taylor noted, “His achingly beautiful music is immediately appealing, yet it rewards continued study and repeated hearings.” A familiar favorite, Hampshire Choral Society had also sung this master work in 1986, 1996 and 2006.

Hampshire Choral Society and the Pioneer Symphony and Chorus have worked in collaboration on special occasions or when a masterpiece requires enormous performing force. Together, they have presented Carmina Burana by Carl Orff, Belshazzar’s Feast by William Walton, Paulus and Elijah by Felix Mendelssohn and A Sea Symphony by Ralph Vaughan Williams.

In May 2018, we enjoyed learning Messa di Gloria by Giacomo Puccini, a rare example of a non-operatic composition he wrote at age 18 while in music school. The expressiveness of this music evoked more than hints at the operatic triumphs that were to come.

On May 19, 2019, Hampshire Choral Society presented The Creation by Franz Josef Haydn in the Fine Arts Center Concert Hall at the University of Massachusetts. As our director, Allan Taylor noted after the performance, “We were blessed with an especially fine orchestra, as well as three soloists who sang this music as if they were born to it. There were moments during the concert when we made time stand still, and the room was utterly silent, yet filled with anticipation. Where else in life do we have the chance to experience magic like that?”

We had the pleasure of presenting a mainstay of the choral repertoire, Requiem by Maurice Duruflé, on November 24, 2019 in Abbey Chapel at Mount Holyoke College, accompanied masterfully on the organ by Scott Bailey, our rehearsal accompanist. “The architecture, acoustics and pipe organ were a perfect match for this music,” as our director, Allan Taylor, noted. Our Young People’s Chorus sang beautifully in the second half of the program, and joined us for a rousing version of Come, Ye Thankful People, Come to conclude the afternoon. 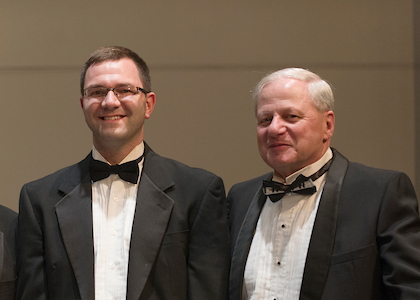 With the arrival of the COVID-19 pandemic in early 2020, Hampshire Choral Society and other choral groups around the world stopped gathering in person. After nearly three years, we are grateful to sing together again. For Fall 2022, we are rehearsing at a different location, in the Sanctuary at the South Congregational Church in Amherst, until our usual rehearsal space at the Northampton Senior Center becomes available in the future.